You are here: Resist Wiki1 / Photoresist2 / General3 / Dilution of resists

Almost all photo resists contain PMA (PGMEA) as a solvent. This solvent is therefore the most common thinner and offered by us as AR 300-12. The PMA is often used for the removal of edge beads (→ Removal or respectively, minimization of edge beads during coating).

Each resist can only cover a certain layer thickness range dependent on the variation of centrifuge speed (see coating). For achieving thinner layers with the resist than can be obtained by the highest revolution speed, it is possible to dilute the resist. It is vital to use only the recommended thinners.

The following diagram shows the ratio of layer thickness and solid content (see image). In the process of thinning, the resist must always be put in first and the thinner carefully added while stirring. If the resist is poured into the thinner, sedimentation may occur during the first drops due to the extreme dilution (solvent shock). It is recommended to fine filter after the dilution, for otherwise particles might interfere with the coating. 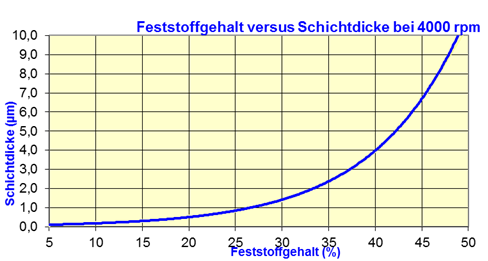 Figure: Influence of solid content in the resist on layer thickness.

The single resist types differ slightly, therefore it is only an estimation. For example, in order to bring a resist with a solid content of 33 % from 2,0 µm to a layer thickness of 0,5 µm, a solid content of approximately 17 % must be adjusted. In this case, the ratio of resist and thinner would be fifty-fifty.

When diluting resists,  it must be considered that additives such as tensides (in all resists), colorants (e.g. AR-P 3840) or adhesive agents (e.g. AR-P 3110) are diluted as well, of course.  This hardly affects the colorants and adhesive agents, since the percentage remains the same in relation to the solid content. For tensides, however, a very strong dilution may lead to a decrease of the surface smoothing effect and radial striations.