Information on PPA, the base polymer of Phoenix 81

Information on PPA, the base polymer of Phoenix 81

Anionically polymerized polyphalaldehyde (PPA), the base polymer for the thermo-structurable resist Phoenix 81, is a white powder which is storage-stable for at least 4 weeks at room temperature. PPA can thus be shipped with standard shipping and does not require the highly cost-intensive refrigerated transport of PPA solutions. When stored in a refrigerator (8 – 12 °C), the PPA polymer is stable for at least 6 months. For long-term-storage,
we recommend temperatures of -18 °C since this ensures that PPA remains stable for at least one year. The polymer PPA dissolves easily in anisole. By varying the polymer concentration, solutions can be produced flexibly to realize different film thicknesses values. The film thicknesses can furthermore be varied by changing the spin speeds. This is exemplarily shown for AR-P 8100.03 (solids content: 2.5 %) and AR-P 8100.06 (solids content: 5.5%)
in the table “Properties I“. The following graph shows the relationship between polymer concentration and resulting film thickness. Information on PPA, the base polymer of Phoenix 81 1. To prepare the PPA solutions, the weighed quantity of PPA is given into a suitable vial before the calculated amount of anisole is added. The mixture is stirred or shaken at room temperature until after about 10 minutes a clear, homogeneous solution results. 2. The PPA solution is transferred into a syringe of appropriate size and filtered using a 0.2 μm syringe filter into a dry and clean bottle. Formulation example for 2.5 % solution 2.5 g PPA + 97.5 g anisole = 100.0 g of 2.5 % 0.2 μm filtrated polymer solution. This corresponds to AR-P 8100.03 with respect to the properties. Please note: 2.5 % is rounded up to 3 % in the product designation. Storage PPA solutions are only stable at low temperatures; we thus recommend storage at -18 °C. In this case, solutions are stable for at least 6 months. Prior to use, solution should be warmed to room temperature to avoid condensation of moisture. Short-term use of PPA solutions at room temperature (up to 3 hours) will still ensure the high product quality. Preparation and use of PPA solutions Dependency of film thickness on solids content (anionic PPA in anisole, 4000 rpm, 30 s, open chuck)

Preparation and use of PPA solutions

1. To prepare the PPA solutions, the weighed quantity of PPA is given into a suitable vial before the calculated amount of anisole is added. The mixture is stirred or shaken at room temperature until after about 10 minutes a clear, homogeneous solution results. 2. The PPA solution is transferred into a syringe of appropriate size and filtered using a 0.2 μm syringe filter into a dry and clean bottle. Formulation example for 2.5 % solution 2.5 g PPA + 97.5 g anisole = 100.0 g of 2.5 % 0.2 μm filtrated polymer solution. This corresponds to AR-P 8100.03 with respect to the properties. Please note: 2.5 % is rounded up to 3 % in the product designation. 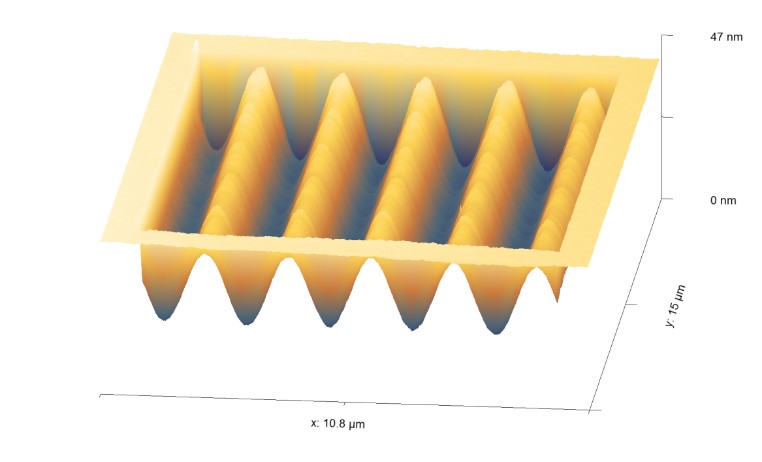 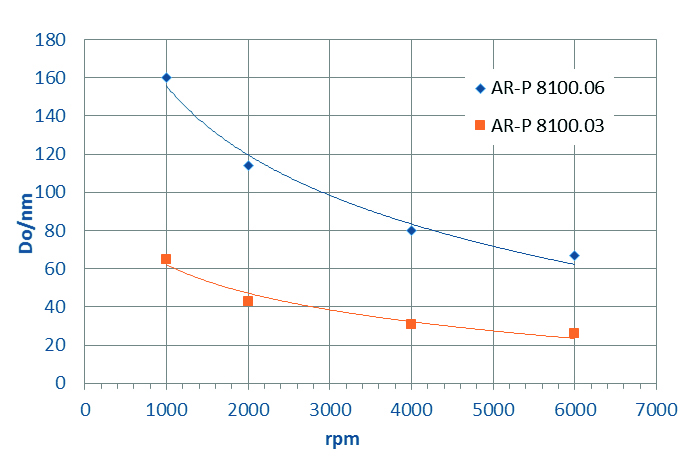 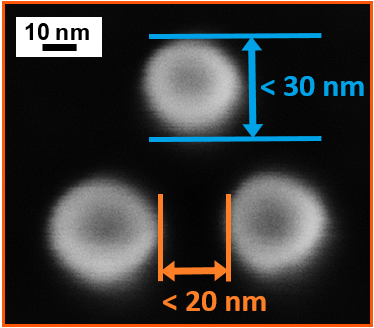 Polyphthalaldehydes (PPA) are thermally structurable resists which were mainly developed for tSPL applications with the NanoFrazor (SwissLitho AG). Key element of this device is a hot needle scanning the resist surface. With each tip, the thermally sensitive PPA evaporates, thereby transferring the desired structures into the layer. Both 10 nm-lines as well as sophisticated three-dimensional structures can be written in this way. The NanoFrazor technology allows writing structures without vacuum conditions. Due to the specific technology, it is also possible to set up the device in a clean laboratory. A cleanroom
is required for the coating the substrates with resist Phoenix 81. The write speed of the NanoFrazor is comparable to the speed of simple electron beam devices for the realization of high-resolution structures. 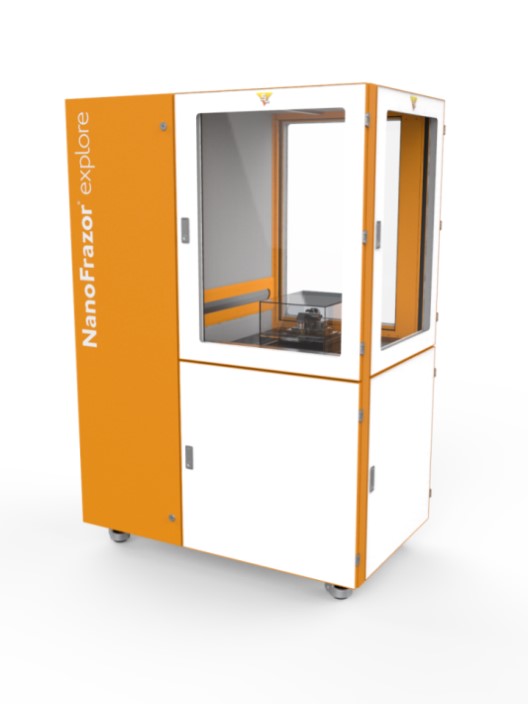 At first, AR-P 617.03 is coated and tempered. After cooling to room temperature, Phoenix 81 is applied as top resist. The layer thickness can be varied in a range between 20 nm and 160 nm. Subsequently, the two-layer system is tempered. The thickness ratio of both layers influences the structural geometry. To obtain a strong lift-off effect, a thin PPA layer and a thick bottom layer is recommended. For a dimensionally accurate pattern transfer however, both layers should be approximately equal in thickness. The entire system has to be optimized with regard to the respective application.

Patterning of PPA with e-beam lithography

PPA layers can also be positively patterned directly by electron irradiation. Similar to the irradiation of commonly used e-beam resists like CSAR 62 or PMMA, electron beam exposure induces fragmentation of the polymer chains. Polymer fragments resulting from PPA are however unstable and decompose into the volatile orthophthalaldehyde. Only very small amounts of monomeric phthalaldehyde are directly released in the device during e-beam exposure; only the subsequent PEB leads to an almost complete thermal development. But even in the range of the dose to clear (approx. 30 – 40 μC/cm²), a resist layer with a thickness of a few nanometres will remain. A residuefree substrate surface can nevertheless be obtained if a short plasma etching step is added. The gradation passes through a minimum, but with increasing dose, also the concurrent cross-linking processes become increasingly important. This undesirable side reaction is due to radicals which are generated during electron irradiation and stabilise the layer by cross-linking. These effects also occur in PMMA layers, but only at much higher exposure doses, and are here used to produce negative PMMA architectures.
To determine the resolution limits of AR-P 8100, line patterns were examined in detail at the company Raith. Lines of different width were written into the PPA layer. After PEB and subsequent platinum metallisation, metal bridges of < 20 nm width were obtained. The highest resolution that could be achieved was 16 nm. Lines written in PPA (resist AR-P 8100) Bridge with width of 16 nm, obtained after sputter coating with platinum (film thickness: 4 nm) Adding PAGs (photo acid generator) to PPA (sample SX AR-P 8100/5) can increase the sensitivity and allow a better control of the gradation. The exposure causes a release of acid in situ which decomposes the PPA layer at 95 - 100 °C during the following PEB (positive development). The thermally induced, solvent-free development proceeds almost completely. Despite the addition of PAGs, a very thin residual resist layer however remains. Gradation of SX AR-P 8100/5 after PEB at 98 °C If PAG-containing resists are used together with AR-P 617 in two-layer process, the thin remaining resist layer will not disturb the further process sequence since it is dissolved during the subsequent development. After e-beam exposure and PEB, bottom resist AR-P 617 is selectively developed with developer AR 600-50. The undercut is adjusted specifically by varying the duration of the development step. Reliably processable lift-off resist architectures can thus be produced. This method allows the realisation of metal bridges (platinum): [/av_textblock] [/av_two_fifth][av_one_half min_height='' vertical_alignment='' space='' custom_margin='' margin='0px' padding='0px' border='' border_color='' radius='0px' background_color='' src='' background_position='top left' background_repeat='no-repeat' animation='' mobile_display='' av_uid='av-4u16rqo'] [av_textblock size='' av-medium-font-size='' av-small-font-size='' av-mini-font-size='' font_color='' color='' id='' custom_class='' av_uid='av-4dicl8w' admin_preview_bg='']

Patterning of PPA with photolithography

PPA layers can also be structured directly by means of photolithography. Irradiation with UV-light of a wavelength of < 300 nm results in a cleavage of the polymer chains to form volatile components. By adding PAGs (photo acid generators), the photosensitivity can be significantly increased. The xposure releases acid in situ which then decomposes the PPA layer at 95 - 100 °C during the subsequent PEB (positive development). The thermally induced, solvent-free development step proceeds almost completely. Cross-linking processes which are also induced by UV-exposure may however cause a thin, only a few nanometres thick residual resist layer. A residue-free substrate surface is obtained after addition of a short plasma etching step. [/av_textblock] [av_textblock size='' av-medium-font-size='' av-small-font-size='' av-mini-font-size='' font_color='' color='' id='' custom_class='' av_uid='av-3www3ow' admin_preview_bg='']

PPA layers can also be structured by laser ablation. Substrates coated with AR-P 8100 were patterned at the IOM Leipzig with pulsed laser light at different wavelengths. This enabled the realisation of architectures with very low edge roughness. In the absorption range of PPA (at 248 nm), complete ablation was achieved without damage of the silicon substrate. 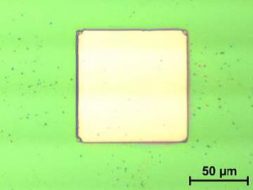 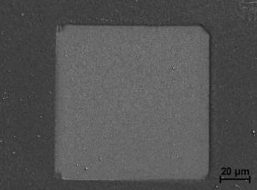 Even though PPA shows only a very low absorption at a wavelength of 355 nm, a selective ablation with comparatively high sensitivity is nevertheless possible. The structures realised here are again characterised by very smooth edges. 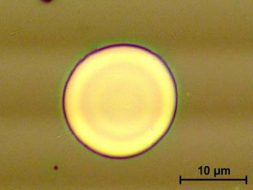 The laser beam can also be used to generate 3D structures. Interference projection through a phase mask allows the production of lattice structures with sinusoidal shape and very low surface roughness. 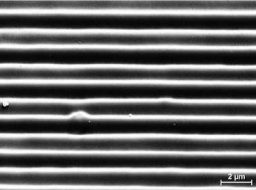 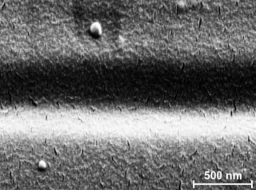