Resist of the Month Archive: April 2014

Resist of the Month Archive: April 2014

We already reported in April 2013 on the CSAR 62 within the scope of our “Resist of the month”. After a fast development phase, sales of this new electron beam resist started in May. A large number of customers have meanwhile used CSAR 62 – with throughout positive feedback concerning application properties, availability and price.

We of course continue to develop this resist series even further. In addition to film thickness values of 80, 200 and recently also 400 nm (AR-P 6200.04, AR-P 6200.09 and AR-P 6200.13) as generally used for electron beam lithography, we also designed a CSAR 62 specifically for higher film thicknesses. We currently evaluate with experimental sample SX AR-P 6200/10 if a film thickness of 1.5 µm at 1000 rpm might be of interest for our customers. The following image shows a structure generated with higher film thickness. 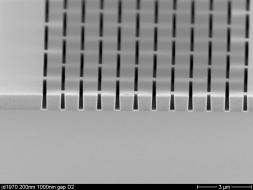 We additionally tested new developers. Using the safer solvent developer AR 600-549 (flash point 85 °C), the sensitivity of the resist is about twice as high as compared to the standard developer AR 600-546, which represents an important feature also for the structuring of mask blanks. First samples of coated mask blanks will be available in a few months.

These new, highly promising aspects prompted us to select again CSAR 62 as Resist of the month April 2014.