Resist of the month January 2015

After the successful development of negative resist SX AR-N 4340/7 which is temperature-stable up to 350 °C, we can now in addition offer a temperature-resistant positive variant called SX AR-PC 3500/8. This resist may be exposed and developed under the same conditions as “normal” positive resists, but structures withstand temperatures of up to 300 °C.

Resist SX AR-PC 3500/8 is thus perfectly suited for all processes involving high thermal strain. The structures tolerate even intensive sputter etchings or high-energy implantations. Removal is possible with aqueous-alkaline removers. For this purpose, an alkaline developer was specifically developed that does, in contrast to aqueous TMAH-removers, not attack aluminium films.

Another field of application, even though at higher film thickness values, are wafer bumping applications. For the alignment of solder bumps, pits are integrated into the resist film. The solder bumps are then deposited in these pits which prevents a rolling off during the soldering process.

But SX AR-P 3500/8 can also be used as top layer for a temperature-stable two-layer lift-off system in combination with AR-BR 5460 as bottom layer.  After exposure and development in which the desired undercut is adjusted, the system can be confronted with higher temperatures of > 200 °C. The undercut remains intact, the top layer does not flow down.

The diverse interesting applications of the new thermoresist prompted us to select SX AR-P 3500/8 as resist of the month January 2015. The resist is now available for own tests. 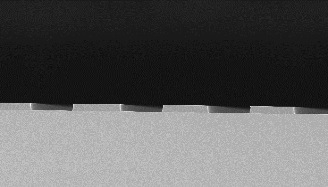