Resist of the month January 2016: Electra 92 has now gone into production!

Resist of the month January 2016

Electra 92 has passed its baptism of fire by the users very well, and an increasingly large number of satisfied customers provided positive feedbacks with respect to the excellent properties of resist AR-PC 5090.02. Meanwhile, also the modification AR-PC 5091 which was especially developed for novolac-based e-beam resists is well established on the market.

In 2015, we further optimised the application properties of Electra 92. Due to an improved and low-loss cleaning regime, the conductivity could be increased by a factor of 10. 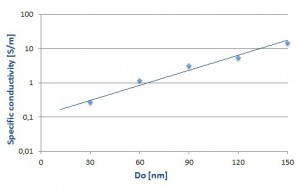 Resistance measurements of an AR-PC 5090 layer generated by spin coating.

The first large-scale production took place in December 2015. Yield and purity both exceeded our expectations by far and thus paved the way for the production of Electra 92 in large quantities.

These achievements prompted us to select AR-PC 5090 and AR-PC 5091 as resists of the month.