Processes however often vary considerably between the users. The influence of parameters like the substrate, resist, developer, tempering regime, structure size and film thickness demand a process optimisation. To support our customers in this respect, we conducted several studies with modifications of the bottom resist. The most important parameter in this context is the development rate, since this factor determines the achievable undercut.

The diagram shows different development rates of four AR-BR 5460-samples in dependence on the novolac fraction at different softbake temperatures: 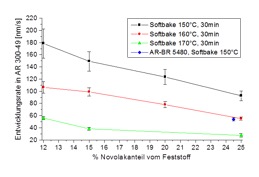 For the sample with 15 % novolac, the dissolution rate for example ranges from 155 nm/s at 150 °C to 40 nm/s at 170 °C. With a broad selection like this, the optimum parameters for every technology can be found.

This high flexibility prompted us to select the modifications of AR-BR 5460 as resist of the month July.