For some applications are universal developers of advantage, i.e. developers which are simultaneously well suited for a variety of resist families. Multilayer systems can in this case be developed in one step, and no change of the developer in between is required. 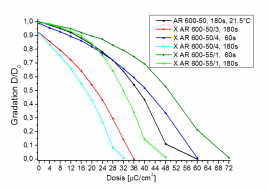 Experimental special developer X AR 600-50/4 is equally suited for the development of AR-P 617, CSAR 62, and 950K PMMA and can thus be used as universal developer for two- or three-layer processes (e.g. especially) for the manufacture of T-gates. The sensitivity is again adjusted via changing the development time. The dark erosion, offering advantages for the generation of undercut structures, is moderate and well controllable. After three minutes of development time, the dose to clear is only about 30 µC/cm2. X AR 600-50/4 is significantly more sensitive in comparison to the standard developer AR 600-50 (dose to clear ~ 50 µC/cm2). The special developer X AR 600-50/3 is also significantly more sensitive than the standard developer AR 600-50; the dose to clear is about 36 µC/cm2. The occurring dark erosion of almost 10 % can be exploited to produce a particularly pronounced undercut. Especially in the case of an irradiation at 100 kV, the production of undercut structures is often difficult because the required electron backscattering (proximity effect) barely occurs. Even though developer X AR 600-50/3 not at all or only weakly develops irradiated areas, the production of lift-off structures is nevertheless easily possible (see right image):

The experimental special developer X AR 600-55/1 is well suited for the development of both AR-P 617 and PMMA. This developer can thus be used as universal developer for two- or three-layer processes, especially e.g. for the fabrication of T-Gates. The sensitivity is again adjustable via the development time. Within a development time of 3 minutes, no significant dark erosion was observed. The forming of the undercut can thus easily be controlled via the exposure dose.