You are here: Resist Wiki1 / Photoresist2 / Other Resists3 / Bleachable resists

The basic idea behind dyed resists developed within the scope of the Photoenco project (June 2016 – May 2019) was that dyes are mixed into the polymer matrix of the resist which then either change their colour or become colourless upon irradiation.

During the fabrication of the first samples it however soon became apparent that the version of dyes changing their colour upon irradiation would not be favoured. Most dyes which were merely intended to change their colour turned out to be not stable enough for the required process conditions and temperatures. It was thus searched for dyes that are decomposed by energy input upon laser irradiation – the resist consequently bleaches in these areas.

Since a 532 nm laser should be used for the later process and since also the ablation experiments were carried out at this wavelength, we focused our attention on dyes with high absorption at this wavelength. In addition to red and violet dyes, classically also black dyes come into question. After first internal tests with a suitable dye, one sample (SX AR-N 4340/13.1) was submitted to the Institute of Technical Optics of the University of Stuttgart (ITO) for further investigation. The advantage of this resist system was the optical density of the resist. The ITO was able to successfully write lines into the resist without ablating it (Figure 1). Figure 2 and 3 show that unwanted ablation results if the intensity of the laser beam is too high.

Fig 1: Lines written at the ITO Stuttgart by bleaching the dye with laser irradiation

Fig 2: Lines written at the ITO Stuttgart by bleaching the dye with laser irradiation of too high intensity – incipient ablation. 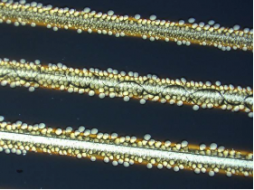 Fig. 3: Lines written at the ITO Stuttgart by bleaching the dye with laser irradiation of far too high intensity – significant ablation.