If the negative resist AR-N 4400-50 is utilised, resist layers of >200 µ m can be built up in repeated coating steps (see product information of CAR 44). Decisive for the quality of the layers to be obtained is the bake procedure. The thick resist films should be dried slowly at temperatures of <90°C and preferably using temperature ramps which reduces the formation of tension cracks in the layer and ensures a uniform distribution of the resist solvent. Since residual solvent content influences the development speed, is it possible to control crucial structural parameters via the duration of the drying process: high levels of solvent favour the formation of undercut structures, while a low solvent content allows the production of vertical architectures. The longer the films are dried, the slower is the development rate (see picture….) 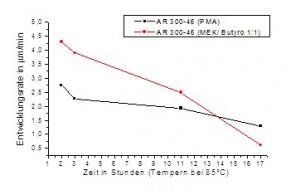 Picture: Development rate of AR-N 4400-50 films with a thickness of 50 µm depending on the drying time. (85°C, oven), comparison of different resist solvents (PMA and butyrolactone:MEK 1:1), TMAH developer AR 300-46

The development rate does not depend on the kind of resist solvent used, but butyrolactone is, due to a higher boiling point, less volatile than PMA and shows a higher initial development rate. After approximately 12 hours of drying however a comparable development rate is reached. It is not possible to develop solvent-free layers in a controlled manner.