To evaluate the suitability of various developers for CSAR 62, Dr. Lothar Hahn (Karlsruhe Institute of Technology (KIT), Institute of Microstructure Technology) kindly provided various substrates which had previously been exposed to 100 kV e-beam irradiation (dose variations). The substrates were developed for 60 s in different standard developers and other solvents (indicated is in each case only the main solvent as e.g. MIBK, but not minor additions of other solvents), developed, and the development was stopped in IPA. The layer thickness was scanned using a Dektak 150. If the measured layer thickness divided by the respective initial layer thickness (D/D0) is plotted against the radiation dose, characteristic gradation curves for each developer are obtained. The steeper the curve, the higher is the contrast of the developer used. Weaker, high-contrast developer cause no or only low dark erosion (development of unexposed areas). In the case of AR 600-546 (amyl acetate) and X AR 600-546/1 (hexyl acetate), an additional rinsing step for 10 s with pure MIBK was conducted after development prior to the stopping with IPA to ensure a complete, particle-free development. 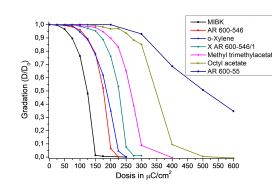 Of all investigated high-contrast developers,