You are here: Resist Wiki1 / Photoresist2 / Other Resists3 / Fluorescent resist structures with photoresists

Photoresists can also be used to incorporate fluorescent dyes. Particularly negative-tone photoresists are of interest in this regard, since the use of selected fluorescent dyes allows defining an adjustable emission in variable wavelength ranges. Resist layers with violet, blue, yellow, orange, or red fluorescence were produced by embedding the respective dyes into the negative-working Atlas 46 S resist. The dyes are stable, and the structuring can be performed according to the same protocol as generally used for non-coloured Atlas 46 S.

The intense fluorescence withstands tempering at 150 °C; and even UV exposure required for cross-linking of Atlas resist films has no adverse effect on the emission properties of the resulting fluorescent layers. 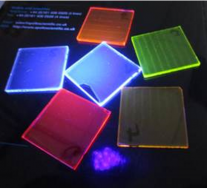 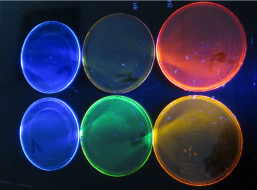 It is even possible to manufacture two-coloured fluorescent architectures with these resists. For this purpose, glass plates were firstly treated with AR 300-80 (new) and then coated with different fluorescent Atlas 46 S variants (1000 rpm, 90 s, SB 65 °C for 10 minutes). Subsequently, exposure was carried out (flood exposure, 4 minutes) using different masks (“AR logo small” as positive and as negative mask). After a PEB  for 3 minutes between 105 °C and 110 °C, development was performed in PMA (time for complete development was about 10 – 15 s, but layers are still stable after 30 – 60 s) and blown dry. The successfully realised and fully developed structures were subsequently coated with a second resist (750 rpm, 2 minutes, SB 10 min at 65 °C). The second colour was chosen according to the greatest possible colour contrast (e.g. the combination blue-yellow or red-yellow).  Both resists do not mix since already established structures are highly stable. The second exposure (as well as the PEB; analogous to the first step) allowed the structuring of the upper layer (for the AR logo, inverse masks were used). After development with PMA, the differently fluorescent areas on the substrate become visible in black light: 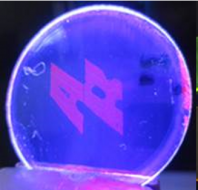 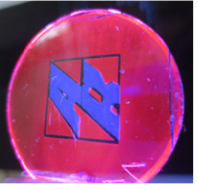 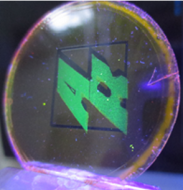 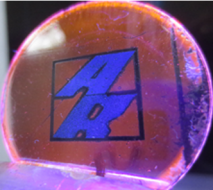 Also differently fluorescing lines adjacent to other can be created in the same way: 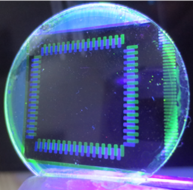 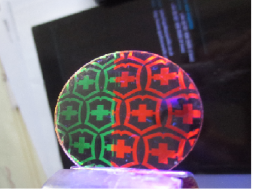