Mr. Y. Nori from Lancaster University (Department of Physics, UK) could very successful generate structures for the production of photonic crystals with CSAR 62. These structures serve as a starting point for the production of GaSb „quantum dots“ which can be applied as single photon emitters. For this purpose, at first a layer of Al0.8GaAs0.2 was established on a GaAs substrate, followed by deposition of a GaAs layer in which GaSb „quantum dots“ were embedded. For the preparation of the photonic crystal, CSAR 62 was applied onto the modified substrate and patterned by e-beam lithography. Subsequently, developed structures were transferred by plasma etching into the upper GaAs layer and finally under-etched by wet chemical etching with HF to produce bridging architectures. 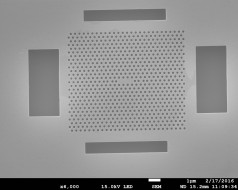 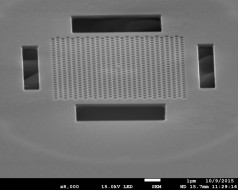 Critical for a successful realisation of GaAs-bridges was the higher plasma etching stability of CSAR 62 as compared to PMMA. It furthermore became evident that at 100°C, a much more favourable etching ratio of GaAs to CSAR 62 can be observed: the etching ratio of CSAR 62: GaAs was 1:3.64 at 100°C, but only about 1:1.9 at room temperature.