A process-stable, sufficiently sensitive e-beam resist with a resolution of about 30 nm is urgently needed to accelerate the progress in electron beam lithography. Chemically enhanced e-beam resists may meet all demands for a high sensitivity, but so far allow only a resolution of > 100 nm. PMMA resists and non-chemically enhanced e-beam resists (e.g. AR-N 7500 or AR-N 7520 ) have the potential to achieve resolutions of < 30 nm, but these resists are not sensitive enough and require uneconomically long writing times. The long-term research concept of the Allresist is strongly aimed at the development of economical high-resolution e-beam resists.

Resist SX AR-N 7520/4 was presented on the MNE 2010 in Geneva which possess a sevenfold higher sensitivity as compared to the standard resist AR-N 7520 ( Download 21. AR NEWS ). Continuing our recent developments since 2011, new synthetic cross-linkers were tested which resulted in a small further increase of sensitivity. In single measurements, a line width of less than 30 nm was confirmed. A further advantage is the improved solubility in the resist solvent. A higher solid matter content allows the production of films with higher thicknesses. Special applications for electron-beam lithography up to a film thickness of 5 µm can thus be realized with these resists.

It is commonly known that smaller structures require higher exposure doses. This also became evident in our investigations. For a structural width of 5 µm, only a dose of approx. 15 µC/cm² (30 kV) was required. For 100 nm-lines, the required dose ranged from 30 – 50 µC/cm² for the three samples. 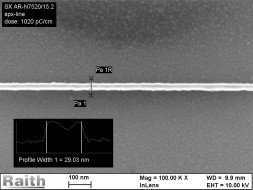