In addition to a structuring with photomasks which is frequently used in lithography, is it also possible to write the structures directly, i.e. without masks, with laser beams. The most commonly used wavelength for this purpose is the 405 nm line.

In analogy to well-known photolithographic structuring procedures (see Resist-Wiki General Basic Chemistry), AR-P 3540 is chemically modified using a controlled laser beam and dissolved in the subsequent development. In test series, new fields of application for AR-P 3540 in maskless lithography were investigated and evaluated.

Good results are presented in the following figures – resolutions of significantly less than 1.0 µm were achieved. 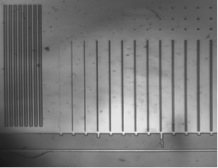 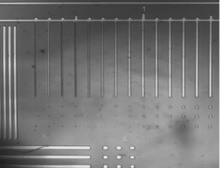