You are here: Resist Wiki1 / Bottom Resist2 / Manufacture of undercut structures for T-gates in three-layer processe...

Manufacture of undercut structures for T-gates in three-layer processes

In principle, several options exist to develop three-layer systems for the manufacture of T-gates. It is however crucial in each case that the different resists do not mix during the coating in order to ensure a coherent and well-defined layer build-up. AR-P 617 can be coated onto all PMMAs (50k – 950k) without any problems, since the resist solvent does not attack PMMAs. Vice versa can AR-P 617 also be coated with PMMA solutions in ethyl lactate or also anisole.

One variant of T-gate fabrication utilizes the different sensitivities of 50k PMMAs (top) as compared to 950k PMMAs (bottom). The copolymer (PMMAcoMA 33, AR-P 617) forms the intermediate layer, since the desired undercut can be well controlled due to the higher sensitivity in comparison to the PMMA.

The desired T-gate architecture can well be controlled via the use of selective developers, the exposure pattern and the duration of the development. T-Gate structures were realised at the MLU Halle (Dr. Heyroth). 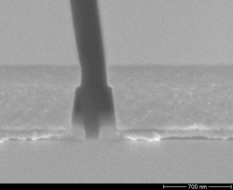 Disadvantageous however is that different developers are required during the development process. We consequently searched for a developer mixture which should be able to develop all layers simultaneously in a defined manner and sufficiently high quality, but also with low dark erosion. The special developer X AR 600-55/1 was optimised for this application and is suitable for the development of AR-P 617 or PMMA and can thus be used as a universal developer for two- or three-layer processes. The degree of the undercut can be easily controlled via the irradiation dose. While higher molecular weight, non-exposed PMMA is not attacked by X AR 600-55/1, shows 50k PMMA a moderate erosion rate of about 8 nm (30 s), 14 nm (60 s), 29 nm (180 s), and about 37 nm after 5 minutes. By applying a slightly thicker top layer and/or a development at lower temperatures (range 15 – 20 °C), the disturbing influence of the dark erosion of the top PMMA layer can be eliminated.

A further variant to establish a three-layer system utilises 950k PMMA as bottom resist, AR-P 617 as intermediate layer, and CSAR 62 as top resist:

No mixing occurs during the coating, and a defined layer build-up is ensured. AR-P 617 can be coated onto all PMMAs (50k – 950k) without problems, furthermore possible is a coating with AR-P 6200 (CSAR 62) since anisole does not dissolve AR-P 617. If selective developers are used after exposure, the T-gate architecture can be well controlled. The high-contrast developer AR 600-546 and also the stronger developer AR 600-549 in addition to MIBK, o-xylene and ethylbenzene develop very specifically the upper resist layer. The intermediate layer can also be developed selectively with X AR 600-50/2 or AR 600-50. Finally, MIBK-containing developer (AR 600-55 or AR 600-56) can be used for the bottom layer.

Disadvantageous is however that the developer has to be changed several times in the course of this procedure. We thus searched for a developer mixture which is able to develop all layers in a sufficiently defined and satisfactory manner. Many strong developers cause pronounced dark erosion. Through a carefully chosen combination of an active (developing) component with development-inhibiting additives, the dark erosion can be reduced, while the simultaneously occurring reduction in sensitivity can easily be compensated by an extension of the development time. The dark erosion of CSAR 62 in X AR 600-50/4 is even after 10 minutes of development less than 5 %. 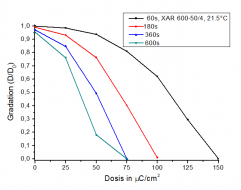