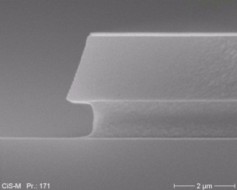 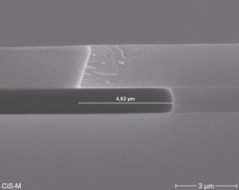 Undercut structures are almost exclusively used for lift-off processes. During evaporation and particularly during sputtering however high temperatures (of up to 200 °C) may occur, so that a high thermal stability of the upper layer is mandatory. In large undercuts as shown in the picture on the right, the upper layer tends to melt and flows off; a lift-off process is no longer possible under these conditions. Experiments to develop a thermally stable positive resist for two-layer systems resulted in no significant improvement so far.

Investigations with negative-tone resists as upper layer in contrast showed promising results. These two-component resist developments could quickly be optimized and produced the desired undercut. For this purpose, resists of the AR-N 4300 -series and bottom layer AR-P 5400 were varied. Resists of the 4300-series are significantly more thermostable than generally used positive resists (see „Alkali- and solvent-stable negative resists“ )