Our highly sensitive e-beam resist AR-P 617 is frequently used in two-layer processes, mostly in combination with PMMA, for the production of lift-off architectures like e.g. T-gates. Often it must be ensured that both layers can be developed selectively and independently of each other. Although MIBK containing developers may be used for this purpose, the process window is relatively narrow since these developers attack both layers. Therefore, new developer systems were evaluated which allow a sensitive development, selectively develop only 617 AR-P but on the other hand do not affect the PMMA layer.

In close cooperation with external partners, substrates exposed with a staggered dose series (AR-P 617, Si wafer, SB 200 °C for 10 min, layer thickness about 1 micrometer, coated with Electra 92, 50 keV) were made available and developed at Allresist with different or  ganic developers. The influence of critical parameters (composition of the developer, development time, developer temperature) on the development process was evaluated in detail. 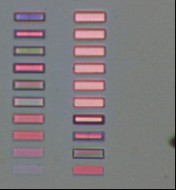 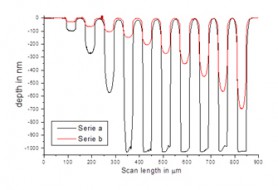 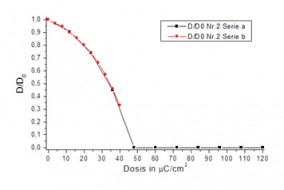 The developed line pattern was scanned several times with a Dektak® 150, and the determined layer thickness values were subsequently used to create a gradation curve. With developer AR 600-50, a „dose to clear“ of about 48 µC/cm2 is obtained.

Development was carried out with the alternative developer 1 (mixture of ethanol and isopropanol) both for 1 minute and 3 minutes at 21 °C and subsequently quenched with isopropanol. The sensitivity can be easily controlled via the duration of the development without any significant dark erosion. The „dose to clear“ declines from about 64 µC/cm2 to only 36 µC/cm2 if the development step is extended. 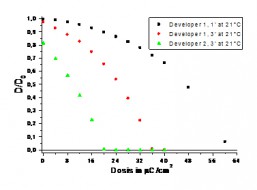 Fig.: Gradation curves of developer 1 and developer 2 in comparison

Developer 2 (mixture of ethanol and water) is significantly stronger, the „dose to clear“ is in a range of about 20 µC/cm2, but unexposed areas are also attacked more strongly. A dark field loss of almost 20 % was measured after a development time of 3 minutes. This undesired dark erosion can be reduced if the development is carried out at lower temperatures. Both new developers are highly suitable for use in two-layer processes since PMMA or also CSAR 62 is virtually not attacked. In general, higher sensitivities are observed as compared to the standard developer AR 600-50.

Because these cookies are strictly necessary to deliver the website, refuseing them will have impact how our site functions. You always can block or delete cookies by changing your browser settings and force blocking all cookies on this website. But this will always prompt you to accept/refuse cookies when revisiting our site.