The various possible applications of Phoenix 81 have already been reported on in the Resist Wiki (see PPA resists). Due to their easily inducible thermal decomposition (see principle of NanoFrazor technology), resist solutions in anisole were so far not long-term stable. In order to ensure a shelf life of 6 months, a storage temperature of -18 °C was recommended. If the resist or dry polymers were kept at room temperature, decomposition started within a few days. The delivery to customers was consequently difficult and costly (within Europe, a transport in dry ice at -78.5 °C is charged with about € 200; expenses for air freight can be far beyond € 1,000).

In the final stage of the Eurostar PPA-Litho project which was aimed to develop the resist Phoenix, we achieved to generate far more stable PPA polymers by optimizing the synthesis procedure.

To evaluate the stability, PPA (powder) samples were filled into different sample vials and stored for 4 weeks under different conditions, e.g. in the freezer at -18 °C or at room temperature (reference temperature is the recommended storage temperature of -18 °C). Selected PPA samples were furthermore daily heated to 35-36 °C for about 8 to 9 hours over a period of 1.5 and 4 weeks, respectively. Subsequently, 5.5 % solutions of the stored PPA samples in anisole were prepared and coated at 2000 rpm. After a soft-bake (3 minutes at 95 °C on the hotplate), the layer thicknesses were determined using a profilometer. 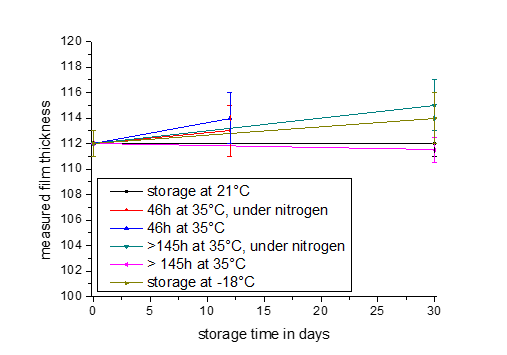 Measurement of PPA film thickness before and after tempering

For all stored samples, identical layer thicknesses within the error accuracy were measured which indicates that, even at higher temperatures, samples show no signs of decomposition just like the PPA which was optimally stored at -18 °C. The PPA thus passed the „stress test“; a cheaper delivery without cooling is easily possible.

The high stability of the PPA powder and the low-cost shipping prompted us to offer Phoenix 81 in the future as a solid by the gram. Upon request, we can also supply the resist solvent (anisole) and a filtration tip as part of a set.