A direct positive patterning of PPA layers is possible by electron bombardment. Similar to the irradiation of normally used e-beam resists like e.g. CSAR 62 or PMMA, the electron beam causes a fragmentation of the polymer chains. The polymer fragments produced from poly(phthalaldehydes) are however instable and disintegrate directly into the volatile monomers. In this process, only extremely small amounts of monomeric phthalaldehydes are released which do not significantly influence the quality of the applied vacuum and can furthermore be exhausted completely. Approximately 2×10-6 ng (only 2 femtogram!) of phthalaldehyde is for example released during the writing of a trench with a length of 1000 nm and a width of 50 nm at a film thickness of 30 nm. By selective overexposure, also lift-off architectures can be generated due to the associated proximity effect.

First experiments concerning a direct structuring by e-beam irradiation have already been carried out at the Raith company. Using the (not yet finally optimised) PPA resist samples of the SX AR-P 8100 series on a PMMA layer, an almost complete development can be achieved with a dose of only about 5 μC/cm² (2 kV). At an acceleration voltage of 30 kV, the value is approx. 35 μC/cm². Substrates which are ejected from the e-beam device after exposure are already completely developed. 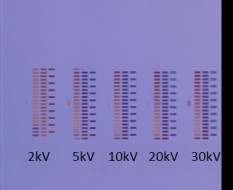 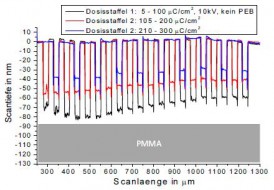 Figure: Scan profile determined on a Dektak 150 profilometer; depth of development as a function of the dose, exemplarily demonstrated for an acceleration voltage of 10 kV.

With increasing exposure dose, also concurrent crosslinking processes are becoming more and more important. Radicals produced by the electron beam are able to stabilize crosslinks and consequently also the layer. This effect likewise occurs with PMMA, even though at much higher exposure doses, and is here used to create negative PMMA architectures.

To determine the resolution limits of resist sample SX AR-P 8100, the company Raith investigated lines patterns in detail. Lines of variable width were written into the PPA layer and coated with a thin platinum layer after metallisation (sputter coating, about 4 nm platinum layer). Line widths of about 20 nm could reliably be produced, and the highest resolution obtained so far was 16 nm. 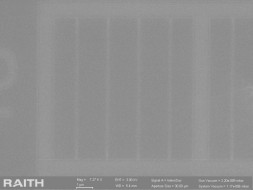 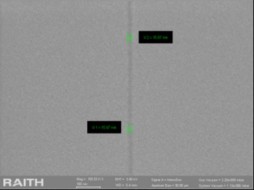