Polyimides are produced by polycondensation of tetracarboxylic dianhydrides and diamines. For highest thermal strain only polyimides are suitable which contain aromatic building blocks in the polymer chain. Due to their insolubility and an extremely high or lacking melting point, these polymers can however not be processed in liquid form. The synthesis is thus performed in a 2-step-procedure, whereby the first step can be processed in liquid form and is condensed in a second step at high temperatures to yield the polyimide (C) („curing process“ in a layer) . The starting components are aromatic tetracarboxylic anhydrides like pyromellit acid anhydrid e (1,2,4,5-benzene tetracarboxylic dianhydride) or biphenyltetracarboxylic dianhydride and aromatic diamines like 4,4′-diaminodiphenyl ether. The following scheme illustrates the procedure:

Figure 1: Schematic presentation of the synthesis of the polyimide

This curing-process can be omitted for applications in microelectronics. For this purpose, a soluble polyimide was produced.

It was possible to make the polyimide alkali-soluble by introducing of OH-groups during the synthesis. After addition of light-sensitive components which are based on naphthoquinone diazides, a resist is obtained (SX AR-P 5000/82) which can be structured under the general conditions of UV-lithography. At a film thickness of 1.8 µm, the sensitivity is approx. 100 mJ/cm² (developer AR 300-26, 3 : 2 diluted, see Image 1). The soft bake was carried out at 95 °C. Unless the structures are heated to more than 150 °C, removal is possible without any problems. 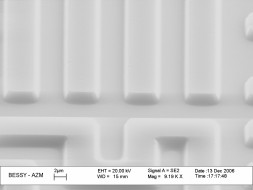