When new and clean substrates (wafers) are used, a heating at approximately 200 °C for several minutes (2-3 min, hot plate) is sufficient for drying. Substrates should however subsequently be processed quickly. A temporary storage in an exsiccator is otherwise recommended to prevent rehydration.

Organically contaminated or pre-used wafers require a previous cleaning step, which is in easy cases performed in acetone, followed by isopropanol or ethanol treatment and subsequent drying (see first section), a procedure which improves the adhesion of the resist. By no means only acetone should be used since the cooling effect produced during evaporation will lead to a precipitation of air moisture on the wafer. If a particular technology requires to process wafers repeatedly and under different environmental conditions, a thorough cleaning is recommended. The cleaning procedure is however strongly substrate- (including the already applied structures) and process-dependent. The use of removers or acids (e.g. piranha) with subsequent rinse and drying step (see first section) may be mandatory. In difficult cases, a treatment with ultra or mega sound is helpful.

Adhesion promoters are used to improve adhesion. The adhesion promoter AR 300-80 is e.g. generally applied by spin coating as thin, approximately 15 nm thick film immediately prior to resist coating. Also HMDS as adhesion promoter may be vapour-deposited onto the substrates. In this case, the mononuclear layer on the wafer surface promotes adhesion due to the hydrophobic properties which support an attachment of the resist. It is not recommended to apply HMDS by spin coating, since only small amounts of the material will remain on the wafer surface and the spin coater is in addition contaminated.

The adhesion strength between substrate and resist is a highly sensitive issue. Smallest changes of the cleaning procedure or of other steps of this technology may have a fatal impact on the adhesion strength. Generally, silicon, silicon nitride and base metals (like aluminium, copper) have good adhesive features, while resist adhesion to SiO2, glass, precious metals like gold or silver as well as the adhesion to gallium arsenide is rather insufficient. In these cases, special measures are required to improve the adhesive strength.

The adhesive strength is also considerably reduced if the air moisture is too high (> 60 %).

Prior to the coating step, resists should be adapted to the temperature of the ideally air-conditioned workspace. If the resist is too cold, air moisture will precipitate on the resist. A formation of air bubble can be avoided if the lid of the resist bottle is opened slightly a few hours before coating to compensate for possible pressure differences, and the resist should not be agitated for a while (see also “Air bubbles”). Thicker resists will require more time, thin resist less time to adjust. A careful and not too fast resist application using a pipette or a dispenser helps to avoid gas bubble formation and thus prevents the occurrence of inhomogeneities in the resist film. 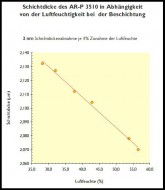 Resists are primarily applied by spin coating. The optimum spin speed ranges from 2000 to 4000 rpm for thin resists and from 250 to 2000 rpm for thicker resist. Spin speed numbers of up to 9000 rpm are generally possible. Under certain circumstances also slower spin speeds of 1000 to 2000 rpm are used to generate thicker films of a particular resist. In these cases however the film quality will suffer and considerable edge beads may be formed (see “Edge beads”). Depending on the respective resist type, film thickness values of 30 nm to 200 µm may be obtained under these circumstances. Thick films of up to 1 mm are produced using casting technologies.

According to a general thumb-rule, resists deposited at 1000 rpm have twice the thickness of a resist deposited at 4000 rpm. This rule allows an estimation of possible film thickness values for a particular resist. For AR-P 3510 , a thickness of 2.0 µm is obtained at 4000 rpm and a thickness of 4.0 µm at 1000 rpm. Accepting a certain formation of rim lips and a lower surface quality, even 8.0 µm thick films can be achieved with a spin speed of 250 rpm, which is however not recommended. Using high spin speeds, a reduction to 1.6 µm (at 6000 rpm) is possible. 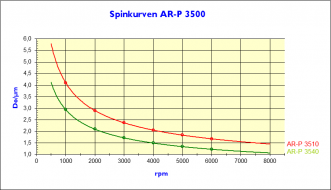 Eliminating or minimizing edge beads during the coating

Edge beads or rim lips may form if thick resists are used, particularly in combination with slow spin speeds for coating. Since edge beads may disturb subsequent processes, their formation can be minimized by several means:

– a fast, short (2 seconds, e.g. 2000 – 3000 rpm) increase of the otherwise low spin speed (e.g. 500 – 1000 rpm) after approx. 10 – 15s to throw off rim lips
– a shorter spinning time at a higher spin speed
– a careful removal of edge beads by spray application of AR 300-12 (in 2 mm distance from the edge) in automated coating systems or using a fine pipette at medium spin speeds
– mechanic removal by wiping or chipping off the edges in the case of rectangular substrates

Each resist is able to cover a certain range of film thickness values by varying the spin speed (see “Coating”). If thinner films of a resist are desired than the maximum spin speed permits, resists may be diluted. In this case however only recommended diluents should be used. Basically all photoresists contain PGMEA (PMA) as solvent which can consequently also be used as diluent – or AR 300-12 as an alternative . The following diagram shows the approximate ratio between film thickness values and solid matter content. This diagram provides only estimates and single resist types may differ slightly. In order to e.g. shift the film thickness of a resist with a solid matter content of 33 % from 2.0 µm to 0.5 µm, the solid matter content has to be adjusted to 17 %. In this case, 1 part of resist has to be diluted with 1 part of diluent.

If resists are diluted, make sure that always the thinner is added carefully and under stirring to the resist. If the resist is poured into the thinner, the extreme dilution of the first resist drops may otherwise lead to the formation of precipitates (solvent shock). After dilution, a fine filtration is recommended to remove particles interfering with the coating process.

During a dilution of resists it has to be taken into account that additives like surfactants (for all resists), dyes (e.g. AR-P 3840) or adhesion promoters (e.g. AR-P 3110) are likewise diluted. The effect is minimal for dyes and adhesion promoters, since the fraction of these additives in relation to the solid matter content remains more or less unchanged. For surfactants however a strong dilution may cause a decrease of the surface-smoothing properties and lead to radial striations. 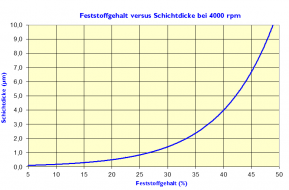