A new resist series was recently developed which is sensitive for laser exposure in this spectral range. The operation principle of these resists is again based on chemical enhancement. The addition of dyes which absorbe at a particular wavelength increases the sensitivity for this laser-wavelength.

A first proof of principle confirmed that it is possible to induce a cross-linking at exposure wavelengths of 532 nm and 1064 nm leading to complete layer build-up. The initial film thickness of 6 µm was fully reached during the writing of spots in a particular energy interval. Below this interval, no structures remained while the resist film was destroyed and removed above this interval due to the high input power of the laser beam. The development was carried out with generally used aqueous-alkaline developers.

In a second step, lines were written. The writing speed of the laser beam is of high importance. The faster the writing speed, the lower is the local energy input. 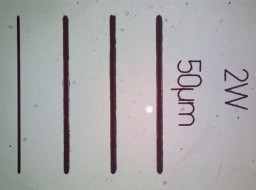 These new negative resists are in addition particularly sensitive in the range of 200 – 500 nm for all lasers and can thus be used for according applications. These include not only applications in micro electronics, but also for e.g. the engraving of rollers or the production of carpets or CNC encoding disks during which generally no yellow light is used. For these applications, a NIR-resist for white-light conditions is available whose absorptions spectrum shows no absorption above 300 nm. This resist can be processed without yellow light.

Resist for near infrared (NIR)