Within the scope of the Eurostar project PPA-Litho “Development and manufacture of resists based on structure-optimised poly(phthalaldehydes) for advanced lithographic applications”, Allresist currently evaluates innovative high-quality resists on poly(phthalaldehyde) (PPA) basis in cooperation with the company Aglycon, the Joanneum Research in Weiz, and the SwissLitho AG in Zurich.

The decisive key feature of PPA-based resists is the possibility of dry development, i.e. a patterning can be achieved without the otherwise conventionally used organic or aqueous-alkaline developer solutions. Poly(phthalaldehyde) is metastable at room temperature, decomposes however rapidly during intense heating into volatile components which are harmless to health. A patterning of PPA layers is possible either through direct laser writing or by thermal probe nanolithography. In both cases, the thermal lability of the polymers is exploited. By introducing energy via a highly heated needle (NanoFrazor, SwissLitho) or using the energy released during laser direct writing, the PPA layer evaporates rapidly and is thus patterned directly. With NanoFrazor-procedures, so far structures with a resolution of up to 10 nm could be realised. 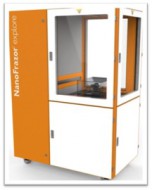