Numerous variations exist for the generation of high resolution lift-off architectures. A dose-dependent undercut can already be realised in one-layer systems, for example by the slight overexposure of CSAR 62 layers and taking advantage of the proximity effect (see. 3.1.6.3.). Other methods to produce a defined undercut are based on the combination of a more sensitive sublayer (bottom resist) and a less sensitive top layer (top resist). Various resist combinations may be used for this purpose, e.g. AR-P 617 (SB > 180 °C, bottom)/AR-P 617 (SB 150 °C, top), AR-P 617 (SB > 180 °C, bottom) / PMMA-based resist (SB 150-180 °C, top), AR-P 617 (SB > 180 °C, bottom) / CSAR 62 (SB 150 °C, top) or AR-BR 5480 (alternative to PMGI resist, SB 150-170 °C, bottom )/CSAR 62 (SB 150 °C, top). For the last two variants, in each case a selective development of both individual layers is possible which renders the process more controllable for the user. CSAR 62-developer AR 600-546 neither attacks PMMA nor AR-BR 5480 significantly. CSAR 62 is furthermore not influenced by MIBK developers (for AR-P 617) or by aqueous alkaline developers (for AR-BR 5480). The degree of the undercut can thus be easily controlled via the applied dose; and in the case of AR-BR is the undercut crucially determined by the SB temperature and the development time.

The most commonly used variant is a combination of two PMMA layers. In this case, a slightly more sensitive PMMA with lower molecular weight is used as bottom layer, while a PMMA with higher molecular weight distribution (50k/200k or 600k/950k) serves as top resist. For the second coating, in many cases a solution of PMMA in ethyl lactate is used since this solvent practically does not attack the lower layer during the short coating times. A major advantage of this variant is that only one developer is required for development. At the MLU Halle (Interdisciplinary Center for Materials Science, B. Büttner, F. Syrowatka, G. Schmidt), the following two-layer systems were examined in detail:

For these experiments, both two-layer systems were coated as shown in the figure and each tempered at 180 °C for 60 s, subsequently irradiated with various doses (30 kV) and then  developed (AR 600-60, IPA). The required doses are comparably high, since a very weak developer was used. The high process stability was in this case ensured by the low-contrast developer used.

All results demonstrate that this two-layer system is predestined for complex lift-off processes. The variant 600K/950K is suitable to obtain a higher total layer thicknesses (> 500 nm) and represents a reliable lift-off system for simple applications.

For the lift-off of high-resolution structures in a two-layer process, PMMA resists (90K and 200K) were adjusted to yield a film thickness of 90 nm to 100 nm. This resist system is particularly well suited for the fabrication of sub-10 nm structures and closely spaced structures with e-beam lithographic processes. For this purpose, structures were fabricated as published in [1].

The exposure was performed with e-beam lithography at an acceleration voltage of 30 kV, and development was carried out in isopropanol for 40 s. As adhesive layer, 1 nm of titanium and 6 nm of gold were evaporated onto the substrate, followed by a lifting-off in acetone.

Results:
Finger structures with a channel width (spacing between the 1 µm fingers) of less than 50 nm could be fabricated in a reproducible and reliable manner. No problems occurred during the lift-off. The exposure dose for the finger structures was between 250 and 300 µC/cm² at an acceleration voltage of 30 kV. The smallest channel width determined was 23 nm. Also for these structures, a reliable lift-off process was ensured. 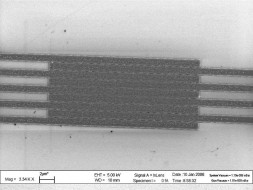 Fig. 4: Finger structures on silicon oxide wafers with a finger width of 1 µm. The channel width (spacing) is smaller than 50 nm. The structure was produced using a lift-off procedure (1 nm titanium, 10 nm gold) and an exposure dose of 280 µC/cm² at 30 kV.