You are here: Resist Wiki1 / E-Beam Resist2 / Positive3 / Use of CSAR 62 for the manufacture of nanostructures on GaAs substrate...

CSAR 62 is routinely used to produce innovative quantum devices at the TU Delft (Mr. Toivo Hensgens, TU-Delft, the Netherlands). For the structures shown below, a 72 nm layer of CSAR 62 was exposed to 100 kV and then developed with amyl acetate. By metal deposition (lift-off process), nano-sized aluminium gates could be realized on GaAs. These structures are suitable for the investigation of single electrons which can be captured electrostatically in the underlying semiconductor layer; an important prerequisite for the realisation of quantum processors.

CSAR 62 is also highly suitable for the production of regular grid structures which can e.g. be used for the investigation of quantum effects with electrons (2D electron gas). 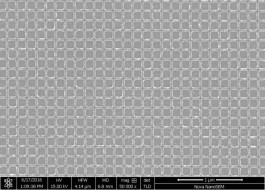