PMMA resists can also be patterned using UV-lithography, but only at exposure wavelengths of 200 – 270 nm (deep UV light). Typically used is the wavelength-range of the lowest line of high-pressure mercury lamps at 254 nm. The image shows the UV absorption spectrum of a PMMA resist. Above a wavelength of 280 nm, the polymer shows no absorption and can thus not be exposed in this wavelength range. 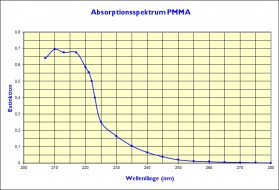 The sensitivity of PMMA at this wavelength is however low, in particular if high-pressure mercury lamps are used since only a small portion of the radiation is emitted at 254 nm. In addition it has to be ensured that no glass (lenses, filters) are present in the beam paths, since glass is impermeable for light < 300 nm. Only quartz glass is suitable for 254-nm lithography. If laser light is used as source for the deep UV-lithography, more energy is available for exposure and PMMA resists can consequently be exposed with acceptable exposure times. After exposure, PMMA films are developed according to the procedure used in e-beam lithography (see Development PMMA films).