You are here: Resist Wiki1 / Photoresist2 / FAQ3 / 6. What are the optimum coating parameters for photoresists in order to...

6. What are the optimum coating parameters for photoresists in order to achieve good film images?

Photoresists (also photo coatings) are primarily used in micro electronics and micro systems technologies for the production of µm- and sub-µm structures. These resists are generally deposited by spin coating. The optimal spin speed is in a range between 2000 – 4000 rpm for thin resists and between 800 – 2000 rpm (rpm = rotations per minute) for thick resists. Generally possible is a spin speed of up to 9000 rpm or as low as 250 rpm. Depending on the type of resist, films of 100 nm to 200 µm can be produced with this technique. Thicker films of up to 1 mm are generated with casting procedures.

30 seconds are sufficient to obtain the desired film thickness at spin speeds > 1500 rpm. The time should be extended to 60 s if lower spin speeds are used.

Substrates should have room temperature before coating. Resists have to be adjusted to the temperature of the (preferably air-conditioned) working area. If the resist is too cold, air moisture precipitates on the resist. Bottles removed from the refrigerator should therefore be warmed to room temperature for a few hours prior to opening.

Air bubbles can be avoided if resist bottles are slightly opened a few hours before coating to allow for pressure compensation and are then left undisturbed. Thick resists require several hours for this process, thin resists need less time. Applying the resist with caution and not too fast with a pipette or dispenser will also prevent bubbles and inhomogeneity of the resist films.

A repeated opening of resist bottles causes evaporation of the solvent and an increased viscosity of the resist. For resist films with a thickness of 1.4 μm, a loss of only 1 % of the solvent already increases the film thickness by 4 %, thus requiring considerably higher exposure doses.

Generally used coating conditions are temperatures of 20 to 25 °C with a temperature constancy of + 1 °C (optimum 21 °C) and a relative humidity of 30 to 50 % (optimum 43 %). Above a humidity of 70 %, coating is basically impossible. The air moisture also affects the film thickness which is reduced with increasing humidity. For AR-P 3510, the film thickness decreases by about 2 nm per each percent of humidity. At spin speeds of > 1500 rpm, 30 s are sufficient to obtain the desired film thickness. At lower spin speeds, the time should be extended to 60 s. For an exposure of rectangular masks, usually a Gyrset (closed chuck) system is used which provides a higher film quality and reduces edge bead formation. It has however to be taken into account that the film thickness decreases to approximately 70 % of the film thickness which is obtained with open chucks. 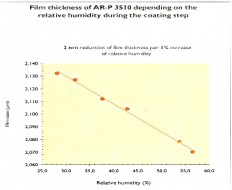