A further variant for the structure of three-layer systems uses 950k PMMA as bottom resist, AR-P 617 as middle layer and CSAR 62 as top resist:

There is no mixing during the coating, thus ensuring a defined layer buildup. AR-P 617 can be coated on all PMMA’s (50k – 950k) without any problems, besides, the coating with AR-P 6200 (CSAR 62) is successful as well since anisole does not dissolve AR-P 617. By use of selective developers after exposure, the T-gate architecture can be regulated well. The high-contrast developer AR 600-546 and also the stronger developer AR 600-549 as well as MIBK, o-xylol and ethylbenzene develop in a very selective manner the upper resist layer. The middle layer can likewise be developed very selectively with X AR 600-50/2 or AR 600-50. Finally, developers containing MIBK (AR 600-55 or AR 600-56) can be used for the bottom layer.

These procedures are presented elaborately in a paper for the MNE 2017, here is a structure made possible by this system. 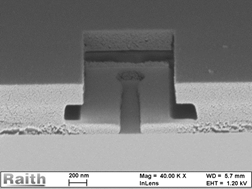 It is a disadvantage for some users, though, that the developer must be changed several times during the process. Therefore, a developer mixture was needed which defines and sufficiently develops all layers. Many strong developers effectuate a distinct dark erosion. By smart combination of an active (developing) component with an admixture that inhibits development, the dark erosion can be reduced. The simultanoeus reduction of sensitivity can be compensated slightly by a prolongation of the development time. The dark erosion of CSAR 62 in  X AR 600-50/4 is less than 5%, even after 10 minutes of development.