The DESIRE process (see Wiki “Top surface imaging photoresist”) can also be used for electron beam lithography even though certain differences exist between photo and e-beam lithography. Structures are written into the resist layer by means of electrons. The components (novolacs and LSCs) intensively crosslink and the OH groups of the novolacs thus remain protected. Naphthoquinone diazide (LSC) is not converted into indene carboxylic acid (see Wiki 1.xxx) during exposure, which is due to the high vacuum during irradiation that removes water from the layer. Water is however a mandatory reaction partner for the conversion into indene carboxylic acid. After partial crosslinking, the resist layer is flood-exposed by photolithography (300-450 nm wavelength). Indene carboxylic acid is again formed in previously unexposed areas and the protective effect on the OH groups of the novolac is released. The organosilicon component (e.g. HMDS) is now able to penetrate into the layer at these sites. If then a dry development with oxygen plasma is performed, the electron-irradiated, non-silylated structures are removed and a positive e-beam resist results.

Within the scope of the BMBF project FB (01 M 2854 D) July 1995 “Electron beam direct writing for submicrometre ASICs” (Institute for Semiconductor Physics, Frankfurt/O., Allresist GmbH), the process was extended insofar that a structuring photolithography was carried out instead of a flood exposure. Areas not exposed during photolithography are also removed in oxygen plasma. A mix & match technology between e-beam and photolithography is thus now available to users. The specific process steps are shown in Figure x:

The advantages of the TSI procedure develop their full potential during e-beam lithography especially if very small acceleration voltages (1 – 5 kV) are used. At 1 kV, electrons penetrate only 150 nm deep into the resist layer due to the low acceleration voltage. The energy input entirely remains in the layer. The low penetration depth is completely sufficient for the TSI process. 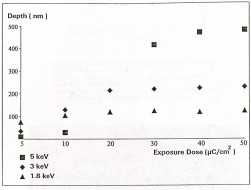 Fig. 2 penetration depths of the electrons in the resist layer dependent on acceleration stress

Fig. 3 shows bars with a width of 1 µm written by e-beam (1.8 kV), followed by flood-exposure and silylation for a longer period of time. The silylated novolac is completely washed out during the “development” with toluene, and only the bridges which were crosslinked by e-beam exposure remain standing.

Allresist also developed a TSI e-beam resist. The experimental model SX AR-P 7300/8 is a positive electron beam resist based on safer solvents which works according to the principle of top surface imaging (modified DESIRE process). After the structuring electron irradiation, the resist is subjected to a flood exposure in the range of 300-450 nm and a surface silylation. The development is carried out in oxygen plasma. The silylated resist is oxidised to form a SiOx mask which is used to transfer the structure into the underlying layer. Mix & match applications are possible; i.e. after electron irradiation, UV exposure and subsequent development with RIE-O2 follow in one step.

• Silylation from the gas phase

As an alternative to gas phase silylation, a liquid silylation can be used.

In the case of mix & match applications, a structuring UV lithography is used instead of flood exposure, but both processes have to be coordinated carefully. 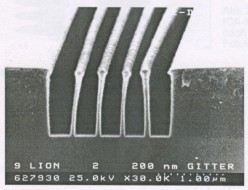 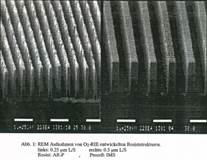