The adhesion of resists to different substrates varies. Many substrates like e.g. silicon, silicon nitride and base metals (like aluminium, copper) show generally good resist adhesion features, while resist adhesion is lower on SiO 2 , glass, precious metals like gold and silver as well as onto gallium arsenide. Measures are thus absolutely required to improve the adhesive strength by adhesion promoters. Adhesion also depends on the pre-treatment of the substrate (cleaning). To ensure a uniform resist film, in most cases adhesion promoters are used. The most commonly used adhesion promoters are HMDS (hexamethyldisilazane), Ti-Prime and diphenylsilanediol-derivatives (AR 300-80).

HMDS binds to water-free surfaces via its Si-atom to the oxygen-atoms of oxidised substrates and under elimination of ammonia. A “wafer-thin” oxide-layer is thus present on basically all silicon surfaces. HMDS is consequently particularly well suited for silicon substrates. The non-polar methyl groups provide a hydrophobic surface with correspondingly good resist wetting and resist adhesion features. In practice, HMDS is carefully vapour-deposited or applied from a nitrogen rinse onto the heated wafers (80 – 150 °C), followed by chemical binding of HMDS to the wafer surface as monolayer. 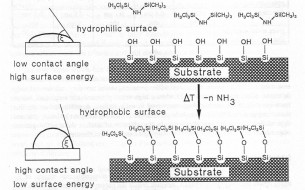 A spin coating of HMDS is not recommended. In addition to the much higher consumption of the expensive HMDS, the resulting HMDS-layers are too thick and may decompose under the resist during the bake – with negative consequences for the development properties. An alternative offers AR 300-80. Diphenylsilanediol is dissolved in a solvent mixture and applied by spin coating. In the subsequent bake step (160 – 180 °C), the silicon-organic compound melts and forms a thin, adhesion-promoting film. In particular on difficult surfaces like GaAs or glass, good coating results are achieved.

A few resists like e.g. resist of the AR-P 3100 series already contain adhesion promoter on the basis of epoxides and can consequently be used directly without addition of AR 300-80.