Anisole PPA solutions can be coated on PMMAcoMA 33 (AR-P 617). The single layers add up in this case; no mixing of layers occurs, which is a decisive prerequisite to realise defined 2- or also 3-layer systems.

After coating and soft bake, the upper resist layer (PPA) is scanned with a hot needle (NanoFrazor). With each needle tip, the thermolabile PPA evaporates and thus transfers the desired structures into the layer. During the following lift-off process, the lower layer is at first dissolved isotropically with a solvent mixture, thereby generating the undercut. The duration of the development step and the developer temperature both influence the degree of the undercut decisively. The undercut can thus be easily controlled by these means. First trials with this system were conducted by SwissLitho. Fig. 2 shows the undercut of bottom resist AR-P 617, Fig. 3 the coating structures (top PPA, below the developed AR-P617).

Subsequently, a metal sputtering process is carried out. Only the metal structures remain after the lift-off. This process is however, due to the isotropic development, limited with respect to its resolution properties. So far, metal architectures with a resolution of 30 nm could be realised: 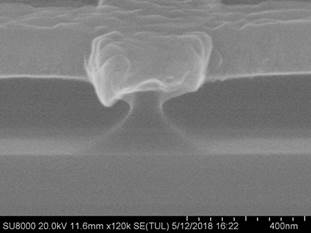 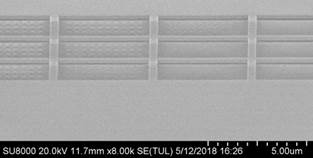 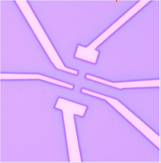 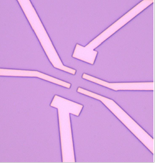