You are here: Resist Wiki1 / Photoresist2 / Other Resists3 / Laser ablation of PPA (Phoenix 81)

PPA layers can also be structured by laser ablation. Substrates coated with AR-P 8100 were structured with pulsed laser light at different wavelengths at the IOM Leipzig (Dr. Klaus Zimmer). In this process, architectures with very little edge roughness could be generated. In the absorption range of PPA, at 248nm, complete ablation was achieved without damaging the silicon substrate. 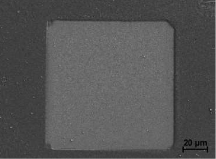 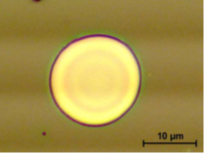 The laser beam can also be used for the generation of 3d structures. Interference projection through a phase mask allows the  generation of grid structures with sinusoidal course and very little surface roughness.