The patterning of negative resists is based on the stabilization of exposed areas in the presence of cross-linking agents. Radical starters like e.g. azo-bis(isobutyronitrile) (AIBN) or dibenzoyl peroxide (DBDO) form upon heating or exposure to short-wave length light < 300nm reactive radicals which cause, due to the chain reaction which is elicited, a cross-linking of the polymer matrix. This results in a lower solubility in organic developers (e.g. MIBK-developers) and exposed areas thus remain after development. 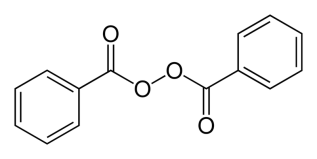 Radical formers are e.g. also aromatic organic diazides which are similarly well suited for photo cross- linking applications (Fig. 3). Exposure to short-wavelength light leads to the formation of highly reactive nitrene-intermediates which may react in various ways with the polymer matrix. By insertion into CH-bonds, secondary amines are formed, an addition to C-C double bounds generates cyclic amines, and radicals are formed due to H-abstraction which also contributes to the cross-linking process. 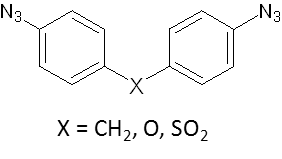 A further important group of substances for negative cross-linking reactions are acidifiers, which induce cross-linking after an activation by reaction with added aminic compounds (cymel). Many halogenated substances are in principle suitable as acidifiers, established however are the particularly light-sensitive trichloromethyl-substituted triazine compounds (Fig.: 4). 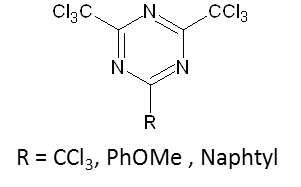 Upon exposure to short-wavelength light and in the presence of traces of water acids are formed, which react with amines under salt formation. The resulting cross-linking proceeds however only slowly at room temperature. A second bake step at approximately 95°C is thus required which accelerates the reaction markedly. The subsequent heating of cross-linked resist layers to temperatures > 150°C leads to a further stabilization and consequently enhanced plasma etch stability. Cross-linking of the so-called CARs (chemically amplified resists) results in altered absorption features (Fig.: 5). 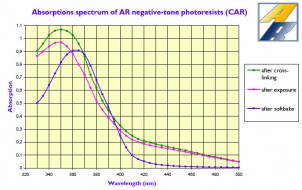