The addition of photoactive compounds (PACs, naphthoquinone diazide (NQD)) to alkali-soluble novolacs reduces the alkali-solubility of resists films. The alkali-soluble OH-groups of the novolacs are blocked by NQDs (inhibitory effect) so that alkaline developer is not able to attack. After an exposure in the UV-range (308 – 450 nm) using an exposure mask, the light-sensitive compound reacts to the respective indene carboxylic acid derivative which increases the alkali-solubility for positive resists by a factor of approximately 100 (see Fig. 1). After development, only those areas which were protected by the mask will remain, while exposed areas are removed. 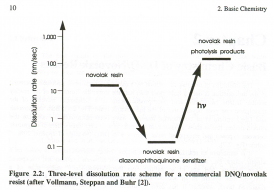 The development speed of exposed and unexposed areas depends on the PAC-content. With increasing PAC concentration, the dissolution rate of unexposed areas is successively reduced due to a higher concentration of alkali-soluble indene carboxylic acids (see Fig. 2). To obtain maximum sensitivity it is sufficient to expose approx. 30 – 40 % of PACs in a film. A complete exposure requires only additional light energy, while the dissolution rate is only marginally increased. The inhibitory effect is already more or less compensated at 40 % exposure. 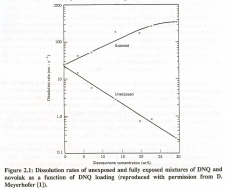 A cross-linking step renders exposed areas insoluble. These areas are consequently not removed during development. Unexposed areas however remain soluble and are removed by the developer.