Allresist designed an e-beam resist which produces, depending on the respective exposure dose used, a three-dimensional resist profile. For general structuring purposes, only a two-dimensional profile is expected from a resists. Resist layers either have to provide a complete protection or none at all, while the height of the resist film is more or less irrelevant for the structuring. If however step structures are to be introduced into a substrate like e.g. in diffractive optics, the resist has to respond to different exposure doses with a different build-up of layers. All “digital“ resists are optimised to provide the highest possible contrast in order to achieve also a maximum resolution. Small dose differences result in the complete build-up of the layer. One could speak of a black and white image. To obtain three-dimensional structures however, also shades of gray are required. We therefore modified AR-N 7700, a negative-working chemically enhanced e-beam resist.

The principle of chemical enhancement is based on a cross-linking of the novolac with a multifunctional aminic compound, a process which is catalysed by protons (acids). These protons are produced during the irradiation of a specific novolac. By a targeted variation of the aminic compound and the acidifier, the possible degree of cross-linking can be controlled. The degree of cross-linking is again responsible for the layer build-up during exposure and thus for the contrast. AR-N 7720 is characterised by a contrast of 0.8, and it was thus possible to achieve a layer build-up of 0 to 1.4 μm across a dose range of 30 – 90 μC/cm². With this result, diffractive optics as shown here can be produced. A transfer of resist structures into SiO 2 using a plasma etch process was also possible without problems. Initial difficulties encountered with a certain roughness of developed resist structures could be eliminated due to a modified post development bake. 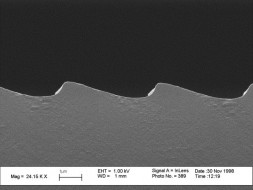 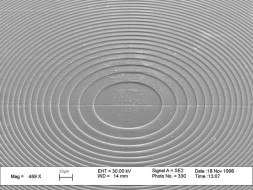