Process-stable negative resist systems which allow resolutions of < 30 nm with sufficiently high sensitivity are of growing interest for applications in electron beam lithography. Many chemically enhanced e-beam resists possess a very high sensitivity, are however so far only suitable for the manufacture of structures up to a resolution of approximately 100 nm. Non-chemically enhanced e-beam resists (e.g. AR-N 7500) have the potential to reach resolutions of < 30 nm, but are on the other hand less sensitive and thus require uneconomically long write times.

Since mid-2012, our new highly sensitive negative e-beam resist AR-N 7520 is on the market, which enables structural resolutions of approximately 30 nm at a very high sensitivity and is furthermore characterized by very good long-term stability. AR-N 7520 new has to be processed under yellow light conditions since this resist also possesses a high photosensitivity in the wavelength range between 300 – 380 nm.

With SX AR-N 7530/1, we present a new negative e-beam resist having the same good properties as the meanwhile well-established resist AR-N 7520 new which can also be processed under white light conditions. SX AR-N 7530/1 also enables resolutions up to approximately 30 nm with more or less comparable sensitivity. The resist is also suitable for UV-structurings in the wavelength range of 250 – 290 nm and can thus also be used for mix & match applications.

Smaller structures require higher exposure doses. This also becomes evident in the case of SX AR-N 7530/1. The dependency of the dose on the structural width is depicted in the following figure 1. At a structural width of 5 µm, only a dose of approx. 13 µC/cm² (30 kV) is required. The dose required for 100 nm-lines however is in a range of 35 – 40 µC/cm². Quite similar results were obtained for AR-N 7520 new. 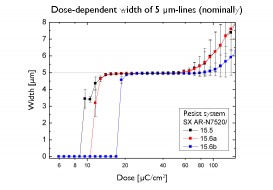 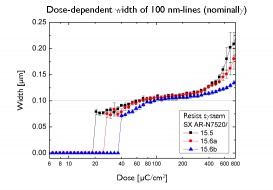 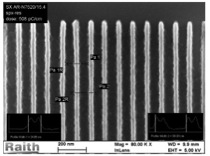