CSAR 62 – In demand around the world

Already eight years ago, the development work on our electron beam resist CSAR 62 was completed. The market launch of CSAR 62 was fast; quickly breaking the market monopoly of the Japanese company ZEON which had up to then been the only company to offer high-quality e-beam resists. For its development and the rapid market launch, Allresist was awarded the Brandenburg Innovation Prize in 2014.

Resist CSAR 62 is meanwhile established worldwide, with continuously increasing demands. Since we manufacture the polymer by ourselves, we had to scale up polymer synthesis. First of all, CSAR 62 made the jump from laboratory scale to a 20-liter trailer. After optimisation of synthesis conditions, we successfully dared the step to a 200 litre synthesis reactor. All required analytical parameters ​​were met, and the yield could thus be increased further. Currently, we have high-quality raw material for CSAR 62 for three years at our disposal, at least on the basis of the current demand. Since we signed two framework contracts for larger regular CSAR deliveries in the past month, we will now considerably push forward the next large-scale approach. 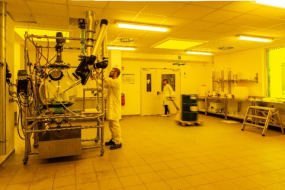 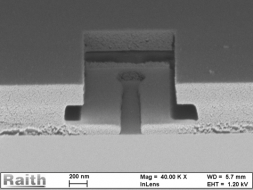 Three-layer process for the fabrication T-gates 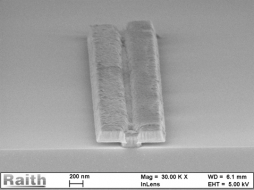 The successful marketing of this resist with its diverse application options was the reason for us to select CSAR 62 as the resist of the month of April.

More Resist of the Month: