The sensitivity of CSAR 62 is strongly influenced by the choice of the developer. In comparison to the standard developer AR 600-546, the sensitivity can be increased almost tenfold if AR 600-548 is used instead. The stronger developer however also causes a certain dark erosion which is tolerable to some degree: If for example consistently 10 % of the layer is lost, can this effect be compensated for in advance by using correspondingly thicker resist films. A development step at lower temperatures reduces the dark erosion considerably, but at the same time the sensitivity is decreased again. It thus comes down to the fact that an optimisation of the process is required. A gentler development at lower temperatures may also cause an increase in contrast and at the same time contribute to a lower edge roughness. 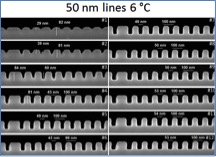 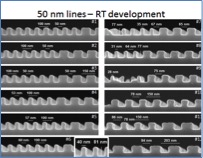 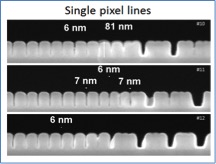 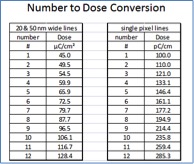 The sensitivity can significantly be increased if the development is performed at higher temperatures, as first results demonstrated. With increasing developer temperature, CSAR 62 films show a significant increase in sensitivity after intensive exposure to UV light while the dark field loss still remains negligibly small, even at 40 °C. 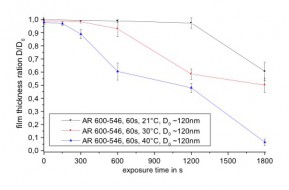 Development of UV-exposed CSAR 62 layers with AR600-546: Influence of temperature