You are here: Resist Wiki1 / E-Beam Resist2 / Other Resists3 / Long-term stability of Electra 92

To assess the long-term stability of Electra 92, two reference samples were coated on glass (300 rpm, 3 min, softbake at 85 °C for 30 min in the oven) after different storage times of 15 months and 3 months, respectively (refrigerator, 8 °C). The glass panes were then contacted with silver paste and the conductivity was determined as a function of the measured temperature. For this purpose, the glass panes were placed on a hotplate and the conductivity at the respective temperature was measured. 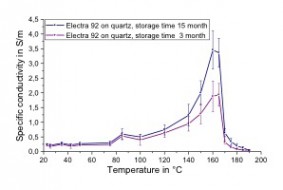 Conductivity as a function of temperature

The specific conductivities of both samples are almost identical at temperatures <100 °C. Electra 92 thus shows unchanged good conductivity properties even after 15 months of storage and correspondingly has a high storage stability. If the temperature is raised to more than 160 °C, a drastic increase in conductivity is observed. This change is mainly caused by a removal of water from the resist layer. After cooling to room temperature, the conductivity decreases again within several hours which can be explained by a reabsorption of water from the humidity in the air. If the layer is heated to more than 165 °C and thus reaches the decomposition temperature, the conductivity decreases abruptly and irreversibly.

Due to the continuous optimisation of the synthesis and purification of polyanilines used, the conductivity of AR-PC 5090 and AR-PC 5091 could be increased in the last four years by a factor of about > 20. The improved conductivity is particularly advantageous for applications with very thin layers (< 30 nm). Electrons are scattered to a lesser extent at thin Electra layers, which is essential to realise very small nanostructures in e-beam lithography. A sufficiently high dissipation of charges by Electra 92 can nevertheless be guaranteed.

The product properties do not significantly change within four years, and the conductivity features of layers remain basically unchanged.