CSAR 62 layers can also be patterned by intensive exposure to UV light. Irradiated films were in this experiment developed with different solvents and the observed sensitivities were compared with each other.

Not surprisingly, the solvents used to obtain the highest possible contrast result in the lowest sensitivity. These weak developers AR 600-546, X AR 600-546/1 and xylene displayed very similar properties. Virtually no dark erosion occurs, and only after a certain threshold dose, the developer shows any effect at all. PGMEA however causes an almost linear development process which is typical of strong developers. Extending the development time from 60 s to 180 s leads here to a significant increase in sensitivity with at the same time low dark erosion of only approx. 12 nm. The highest sensitivity was observed for ethyl acetate (acetic acid). Mixtures with isopropyl cause a considerable decrease of the dark erosion rate, while the sensitivity is at the same time only slightly reduced. 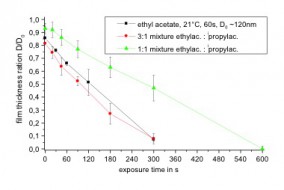 The dark erosion of ethyl acetate can furthermore also be reduced to acceptable levels (~ 5-10 % dark erosion for the generally used development times of < 2 minutes) by decreasing the developer temperature to 12 °C or 18 °C. 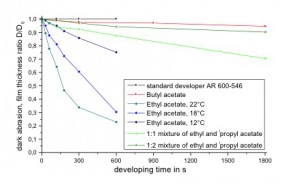 Quite evidently, a certain amount of dark erosion can more likely be tolerated if thicker layers are used as compared to very thin layers. The observed removal rate depends on the kind of resist, the developer used and the temperature, but not on the respective layer thickness. While for example a removal of 100 nm is hardly noticeable at a film thickness of 800 nm, a 100 nm layer is already completely removed in this case.

The strong standard developer AR 600-548 and ethyl acetate are also suitable as developers for thicker CSAR 62 layers and show a very similar course of development at almost identical sensitivities. In the case of ethyl acetate, extending the development time from 60 s to 120 s increases the sensitivity even further. 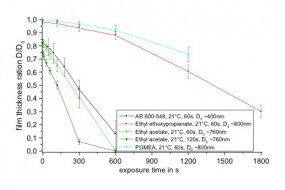 PGMEA and ethyl ethoxypropionate (EEP) result in lower sensitivities, but on the other hand are unexposed resist areas in contrast to AR 600-548 or ethyl acetate only marginally attacked. Extending the development time and/or a development at higher temperatures would most likely result in an increased sensitivity.