Resist of the month July 2016: Negative PMMA resist for photolithography

Sensitive substrates do not tolerate aqueous-alkaline developers. For such cases, X AR-N 4800/16 was developed already several years ago. While this resist met all the demands placed on it, only a layer build up to 70 % with moderate sensitivity was possible.

In terms of the constant improvement of our products, Allresist transferred the principle of chemical amplification to a PMMA resist. The sensitivity is thus considerably enhanced and the exposure wavelength range increases to 300 – 436 nm. Furthermore, the layer build up reaches the initial layer thickness.

Resist SX AR-N 4810/1 can now be used for the above-mentioned anhydrous photolithography, but also other applications become apparent. The layer can be crosslinked completely by full surface exposure and heat treatment and is thus highly suitable for a use as bottom layer in thin multi-layer systems.

The crosslinking step eliminates the risk that the second resist attacks the first layer during coating in such thin layers. Within the scope of the Euro Star PPA Litho-project, the novel PPA-resist (in anisole) can now be applied onto a 20 – 30 nm thick PMMA layer.

Also further experiments are conducted to assess if the crosslinkable PMMA resist may be able to increase the potash-stability of protective coatings AR-PC 503 and AR-PC 504. Results in this respect will be presented in the October 2016 ssue of the AR NEWS.

The versatility of the new PMMA resist SX AR-N 4810/1 was the reason to select this product as resist the month. 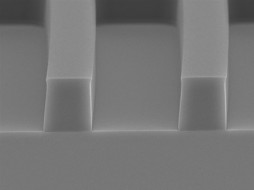