Our last resist of the month was the thermally stable two-layer system SX AR-N 4340/10 – AR-P 5460 which reliably tolerates temperatures of up to 200 °C. The investigations with respect to thermal stability were now continued for negative resists.

The new thermally stable resist SX AR-N 4340/6 was adjusted to yield a film thickness of 5.5 µm. After standard exposure (broad band UV) and subsequent cross-linking step (bake at 95 °C), the development was performed in aqueous-alkaline developer. The line structures obtained with high sensitivity (and with comparably good resolution as for AR-N 4340) were then heated stepwise to up to 350°C. SX AR-N 4340/6 was able to withstand these temperatures without any problems, and no significant rounding of edges was observed. Due to sintering processes, the film thickness decreased by approximately 20 % (see Picture 1), while the very good quality of the surface remained unchanged (see Picture 2). 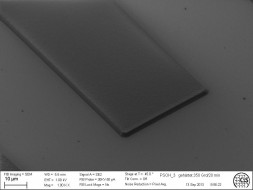 With this resist, entirely new fields of application for Allresist products are opened. SX AR-N 4340/6 could for example offer a good alternative to BCB resists. A major advantage of our new development is the aqueous-alkaline development and the compatibility with standard photolithography. SX AR-N 4340/6 is furthermore well suited for other high-temperature technologies, since in addition to its temperature stability, the resist is also characterised by high plasma etch resistance and good insulating properties.

These interesting results prompted us to choose this new development of a temperature-stable negative resist as resist of the month October.